I took these pictures a few weekends ago....this is what our perfect weekend day looks like.  In this case it was Sunday, we skipped church because Josh's concussion prevented us from going out anywhere.

We started with a morning walk to Starbucks.  Instant good mood.

One of my favorite things about weekends is that they encourage downtime.  I love to see what my kids will entertain themselves with.  Emma has been enjoying playing "dentist".  This is her "kit" of "tools".  Basically, there are toothbrushes, flossers, toothpaste, mouthwash, and scrapers (paper-clips that have been straightened).  She begs to play "dentist" with all of us - I usually don't like having my mouth scraped with a paper clip.  Can you blame me? 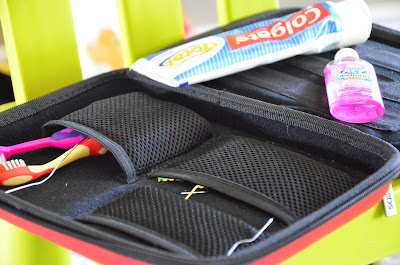 The perfect ending to our weekend day was a very casual dinner on the front porch.  Homemade pizza, fruit, and paper plates. 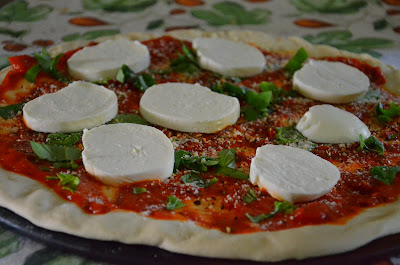 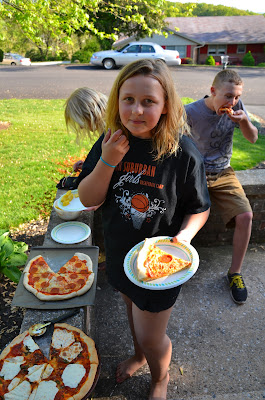 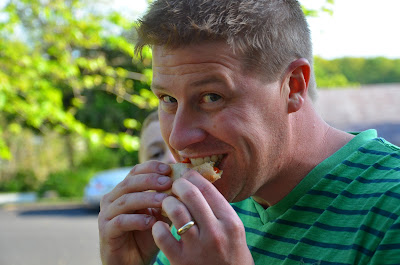 What is your idea of a perfect weekend day?  I'm a bit of a homebody, so my ideal time is usually spent at home, with our little fam.  Maybe yours is shopping, quilting, or traveling.  Weigh in on your idea of a day well spent!
Posted by Kirsten's Cooking at 8:36 PM 2 comments:

One of the best deals going...

Here in the heart of Pennsylvania Dutch Country, we have all kinds of carb-o-licious fare.  Meat, potatoes, and starch headline most of the specialties of the region.  And I love every part of it!

One of our local donut companies (the only one that I know of) is Maple Donuts.  Started in 1946, they are a hometown favorite!

The production facility is located less than ten minutes from our house, and there is a retail store that sells day old donuts.  And, you can get three dozen for $5.00.  We don't normally purchase three dozen, but occasionally it comes in very handy.  Basically, the day-olds are $2.50 a dozen, and if you purchase two dozen, you get the third for free!

We're leaving for our cabin in about an hour and we plan to take the donuts with us!  There will be twelve of us, so I don't think three donuts per person over the next 36 hours is over the top, do you?  :)

I tried to pick a variety of donuts that would please all of us.  Rob likes plain glazed, Kate and Emma like frosting with sprinkles, and Josh likes custard-filled.

I'm linking up with Shay at Quilting in my Pyjamas today for Favourite Thing Friday.

My favourite thing this Friday is my job.  My occasional job.  I consider my full-time job to be a wife and mother, but occasionally I get the chance to work as a personal chef.

Two weeks ago I was able to provide food for a college graduation lunch.  The graduates finished their rehearsal and then attended the lunch with their families.  I was asked to provide enough food for 175.  It went really, really well!

I had the bonus of preparing and storing the food at my in-laws house and freezing a lot of the prep food, so my work was spread over a two-week period.  I was able to make and freeze all of the desserts the week before, so that was a huge help!

The week of the event was a busy one here.  In between preparing for a huge job, our son was recovering from a pretty major injury.  So, that week, in between cooking copious amounts of food, we had a pediatric neurology appointment, MRI, orthopedic appointment, surgery, soccer practice, and a tractor trailer load of mulch delivered to our driveway.  It was quite the week.  seriously.  I think I'm finally recovered.

Anyway - I managed to take a few pictures before the first bus load of graduates arrived.  The food was a hit!

The sticky bun ham and cheese sandwiches were to die for. Trust me when I tell you that you need these in your life. I'll share the recipe at a later date.


The desserts were fairly straightforward. I made white chocolate lemon truffles, dark chocolate truffles, shortbread cookies, and molasses cookies. The plan was for me to also make chocolate brownies with peanut butter chips, but when we found out that Josh would need surgery to repair his wrist, I copped out and went store bought with the cream puffs. 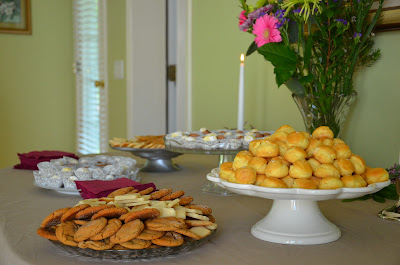 The great news is that there were leftovers!  It's virtually impossible to predict who will eat what and how much!  I made 180 crab melts, 160 chicken salad croissants, 160 ham and cheese, and 150 of each truffle.  It was plenty - but my biggest fear is not having enough!  So, it all worked out - the leftovers went to some of the staff, and my in-laws shared the rest with the family!

I think I love my occasional job because it's just that - occasional!

Happy Memorial Day Weekend and be sure to thank someone who's served!
Posted by Kirsten's Cooking at 10:52 AM 9 comments:

You were delicious.  And huge (over five pounds). And a hit with the kids in the neighborhood.  The girls thought we were going to keep you as a pet.  Sorry we had to eat you. Thank you , Larry the Lobster - we won't forget you! 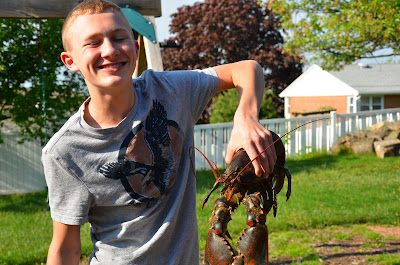 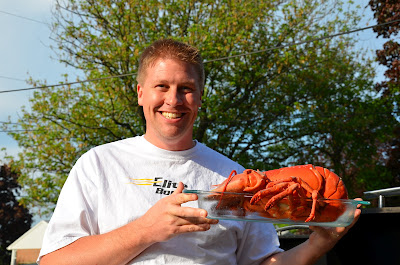 So, there's this little recipe contest - and I was invited to join in!  I was sent an email by Stonewall Kitchen asking for my participation in creating a recipe using one of their mustards.

I am a big fan of Stonewall Kitchen, as evidenced here , here, and here.

I requested the spicy honey mustard and my recipe ideas ranged from potato salad, to a grilled pork loin, and finally to roast chicken.  Truth be told, I'm kind of addicted to dipping wedges of swiss cheese into the mustard, but that's not what this contest is about!

I came up with the easiest glaze ever and simply poured it over a whole chicken and roasted it.  Easy to the max!

I had a great assistant in our son, Josh, who obliged by taking pictures during the cooking process - we even managed to capture a few "pouring" shots. 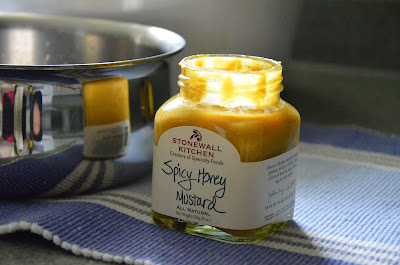 I then heated the saucepan over medium-low heat for about twenty minutes, until the mixture reduced and thickened

Next I prepared the whole chicken.  I rinsed it and removed all of the innards.  I decided to stuff the cavity with orange wedges and onion wedges 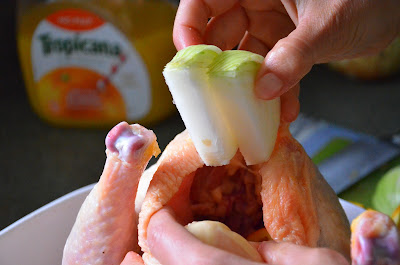 Roast chicken with glaze, uncovered, for at least 1 1/2 hours (follow the cooking directions on the chicken package, it should give a range for the poundage) or until internal temperature reaches at least 165 degrees Fahrenheit.  Allow chicken to rest before carving.
Posted by Kirsten's Cooking at 11:47 AM 2 comments:

We had a little situation last week.  A scary, heart-pounding (definitely not mundane) situation.  Our oldest child was a trauma patient.  In the midst of all of this, though, I'm feeling all warm and fuzzy inside.

He happened to be skateboarding with his friends, made a reckless decision, and hurt himself pretty badly.

My in-laws had the unfortunate experience to be at our house after he returned home (I picked him up from the side of the road in our neighborhood).  Josh was Alzheimer-esque.  He kept repeating the same things over and over.  He literally had no idea what had happened, not remembering why he was hurt, who he'd been with, or even anything from earlier in the day.

Once Rob raced home from work, we took him directly to the hospital.  While Rob was parking our vehicle, I had Josh seated in the waiting room so I could register him as a patient.  He was sitting in the corner asking the same unintelligible questions from other patients.  I literally had two people approach me to warn me that something was wrong with him.  As a side-note, there was a man who was waiting for care because his wife tried to bite his lips off.  By all appearances, he was a rough character - but you know what? He was concerned about my kid.  Even though he looked like a gang-banger, he came up to me and told me that my son was not right.

Anyway, back to the story.  Josh was [almost] immediately made a trauma patient.  He was fitted with a collar and wheeled into the trauma bay.  We were taken to the patient room, assigned a patient advocate and  were left waiting to see what was wrong with our son.  We felt helpless and the "what if's" were running rampant.

A school father was the trauma surgeon helping him and one of the nurses was a family friend.  We felt like he was in good hands, but it was scary.  We were sitting in the room where people wait for the worst kind of news about their loved ones - the ones that never go home.

The short explanation is that Josh is remarkably fine.  He suffered a serious concussion (thank the Lord for his helmet, it cracked but it saved him) and a fractured wrist, but he'll be fine.  His major source of pain is the road rash on his back, but it's healing quickly.  His CT showed no brain bleeding or swelling and we're so grateful.

He spent the night on the peds floor and was well cared for.

And, on to the warm and fuzzies.  This was probably one of the scariest situations we've even been through and I can honestly say that we felt divine intervention throughout.  It truly felt like the Lord had gone before us in the whole situation: with the timing, the health care professionals on duty, and the experience we've had afterward.

Our son is loved.  We are loved.  We are blessed.  Josh has had an outpouring of care from friends and family.  Our living room was full of boys on Friday afternoon.  His friends wanted to be with him - to check on him and just hang out.  We had seven boys in our little house and it was great.  He had a special friend stop by on Friday night just to drop off Doritos and say she was glad he was okay.  His whole bus signed a get-well card for him and our neighbors mailed a DQ giftcard.  Rob's brother-husbands brought their coffee date to the pediatric floor, bringing my husband coffee, breakfast and their presence.

From the gang-banger to the physicians, nurses, and our friends and family - we feel a sense of community.

The Lord truly blessed us in this experience and it's something we won't soon forget.

The good news is that Josh has made his one reckless decision as a teenager and now we can relax, take a deep breath, and rest easy for the rest of the teenage years.  Right.  Seriously, though, we are praying for increased wisdom in his life.  He's a great kid and we're thankful for his life. 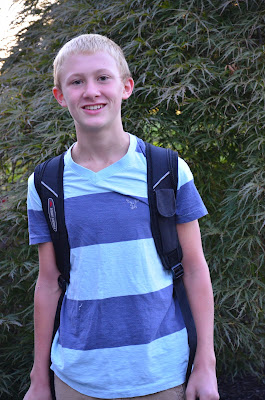 Posted by Kirsten's Cooking at 9:21 AM 6 comments: