I'm curious - how many of you like trying new recipes?  I go through phases where I make the same thing over and over, but in general, I do enjoy trying new things.  This week I tried two new recipes, both of them via an online source.  I liked both dishes, but I didn't love either.  I doubt they'll make it into our normal rotation, but it was fun to experiment. 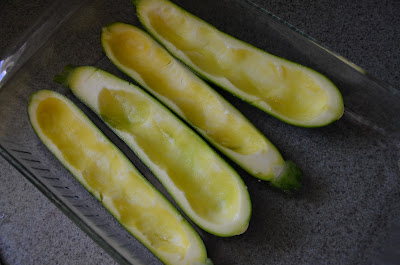 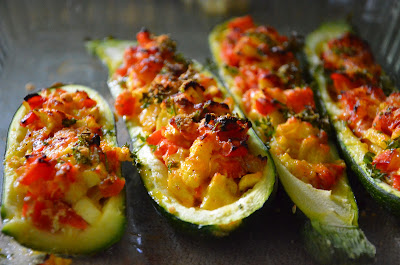 I like the concept - but I'll totally do it different next time.  I'd like to use the zucchini boats to mimic a carb-less stuffed shell or manicotti dish.  Think ricotta, parm, mozzarella, and some roasted veggies (probably utilizing a little pancetta as well).  Here is the original recipe, courtesy of kayotic.

And for dessert, the contender was rhubarb snacking cake.  Again, tasty, but kinda eh.  I have yet to find a yellow cake recipe that doesn't taste like cardboard.  I think we've all been spoiled by those box cakes and their creepy delicious texture.


The one thing I did love about this cake was the lemon flavor - rind in the cake and juice in the topping.  yum.  I think I'll use my mom's buttermilk cake recipe (just half) and sub that in for the original.  I'll keep you posted if I do succeed in creating something shareable! here is the original recipe, via smitten kitchen

All I know is that I've got just enough rhubarb left to make this - and I'm making in (and maybe sharing some).
Posted by Kirsten's Cooking at 4:31 PM 1 comment:

Here is the promised recipe for the sticky bun ham sandwiches!  I found this to be the perfect make-ahead food to feed a large amount of people.  I assembled the sandwiches (omitting the sauce and baking) and froze the pans until I needed them.

These sandwiches are so low-maintenance.  Once baked, they can be served hot, warm, or room temperature.  They're even great the next day straight out of the refrigerator.

The original recipe was given to me by a friend.  It called for an obscene amount of butter.  I more than halved that amount, and the result was spectacular.  The combination of salty and sweet combined with sticky and gooey - satisfies every craving you've ever had.

You could make these sandwiches for a bridal shower, picnic, cocktail party, or even for a light dinner.

Whatever you make them for, I promise you that you'll love them! 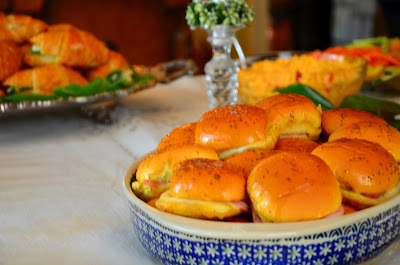 After assembling ham and cheese sandwiches (rolls, ham, cheese), combine remaining ingredients in a saucepan.  Bring mixture to a boil for 2 minutes.  Pour mixture over assembled sandwiches.  Bake at 350 degrees for 20 minutes.
Posted by Kirsten's Cooking at 3:55 PM 5 comments:

With the exception of humidity and bugs, I love everything about summer.  Everything.  The long days, the warm temperatures, summer thunderstoms (!), and a laid-back schedule.  Our summer has started about two weeks early on this side of the ocean.  All of our produce has been a little early, and I am not complaining!  My flowers are gorgeous and our little garden is growing very well.  I've harvested the last of our lettuce and spinach, and we're just waiting on sugar snaps and tomatoes.  I'm planning to make a new recipe with the rest of my rhubarb, and I check my fig tree and raspberry bush daily to look for new fruit.  My favorite time of year, by far.

So, my favourite thing today is the produce we've been enjoying in the month of May! 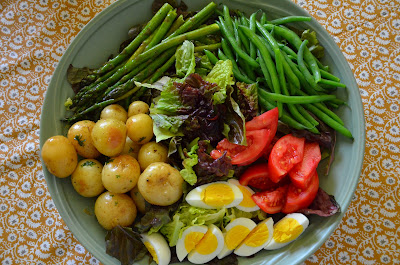 I made two huge salads this week to take to friends as a thank-you gift.  I piled roasted asparagus, steamed green beans, sliced tomatoes, sauteed potatoes and chopped egg on top of red romaine lettuce and sent along this salad dressing to pour over when ready to be served.  All of the ingredients, with the exception of the eggs, were locally grown. 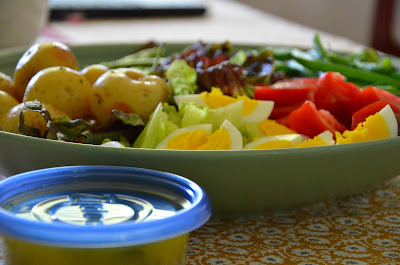 I also picked strawberries this week! 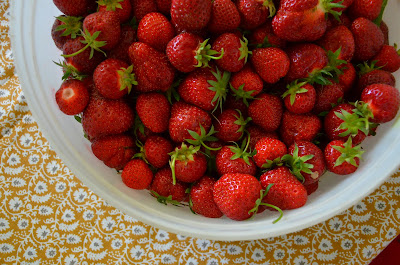 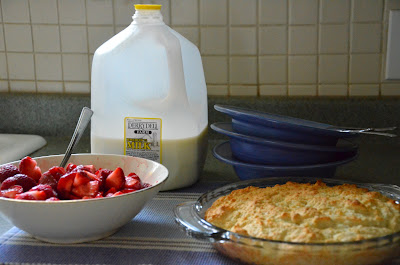 The perfect breakfast: strawberry shortcake!  If anyone has a good recipe for shortcake (that doesn't use Bisquick), would you share?  I can't get the homemade version to compare in a positive way!

Fresh spring produce is my favourite thing this Friday - go check out Shay's favorite this week!