From forest to table and raspberry cobbler 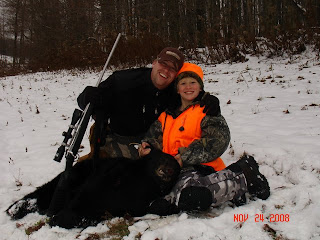 Well, no doubt you've heard the phrase, "from farm to table". We had a dinner that came straight from the forests of Potter County in northern PA. We had the final roast of Rob's bear from last winter. Let me just say, it was delicious. Seriously, the flavor, tenderness and moistness of the bear was better than beef. It really reminds me of elk. I really want to check out buying some "wild game". I've always loved duck, rabbit, pheasant, and elk and now I'm feeling inspired to do some research into how and where to buy alternative meats. 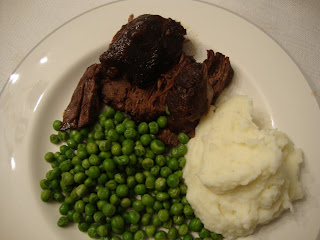 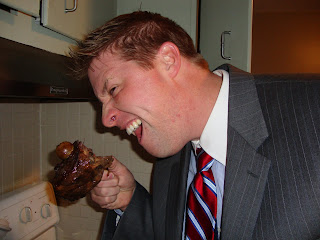 Last year Rob and Joshua had the opportunity to bear hunt in Potter County at a friends camp. Only one in 50 hunters typically harvest a bear in PA. On the first day of bear season last year my guys landed a young female, the bear check station estimated her age to be about 4 years old. We had the hide made into a rug which we'll display at our cabin, and we also took the meat to a local butcher shop. Apparently they hadn't butchered a bear in quite a long time, but I am so glad we decided to eat the meat. We ordered jerky, bologna, roasts, and tenderloins. I was skeptical but thankfully our girl had apparently been eating corn instead of garbage, because the meat was amazing. I know some people say they would never eat bear, and it is a gamble, because the butcher bill was $140 and we really didn't get that much meat, but it was a novelty that paid off!

I prepared the meat simply, in the same way I prepare beef tenderloin. I marinate the meat in olive oil, red wine, salt, and ground pepper. I then briefly grill the meat and then finish roasting in the oven, covered.

As I was opening my freezer tonight, I discovered that I had a bag of frozen raspberries that my mom had given me [from 08]. I considered making a raspberry crisp, but thought I'd try something different, like a cobbler. I had a recipe I'd used early in our marriage, but it was always kind of ho-hum. I keep forgetting that I have this little treasure, a Bon Appetit cookbook. Seven hundred pages of perfectly delectable recipes like this one; Peach-strawberry cobbler with buttery lemon crust. I substituted raspberries for the peaches and strawberries. It was really, really good.

If you're looking for a versatile cookbook with straight-forward recipes and fresh ingredients, I would suggest a Bon Appetit Cookbook. I have yet to peruse the entire contents (792 pages!), but I have found the recipes to consistently taste flavorful and fresh. The recipes are surprisingly simple, and although the book is huge, you'll never run out of ideas. I happened to find this one at a local discount store, I think it was $10. I would have paid much, much more. 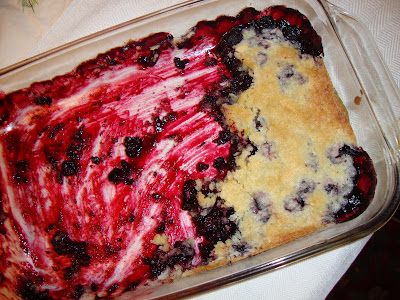