For once, it finally looks like Christmas here! We still have about 6-10 inches of snow on our street, it still looks rather pretty. I have quite a bit of work to do today, but I'm looking forward to spending some time in my kitchen. I'll be making a cauliflower gratin, some grilled vegetables, a mincemeat pie, and a three-layer buttermilk/red velvet cake.

I'm hoping that we are able to start a few meaningful traditions this year. I would like to teach our kids to enjoy giving as well as receiving, and this year we will visit [and bring gifts to] one of Rob's clients who lives in a nursing home (and has no family). I'm a little anxious to predict the interaction between our kids and an elderly man, but I'm really glad that Rob suggested we make a visit. I hope it will be a meaningful visit to Mr Perry, and that it inspires our kids to be compassionate and generous in the future.

We're going to attend my brother-in-law's Christmas Eve service and then we'll come home and make some pizza. I am planning on buying a bunch of ingredients and I think we'll each assemble our own.

A tradition I've enjoyed since I was a child is a sweet bread my grandmother made. Hefekrantz is a German braided bread that we fill with cinnamon, sugar, butter, and semisweet shavings. My dad and I each made one yesterday. I typically shy away from yeast breads because I haven't found an effective rising place in our house. My dad uses his kiln, because he can keep the temperature consistent. I had planned to serve our bread Christmas morning, but we just couldn't wait! I don't have the recipe, or my dad's permission (just because I haven't asked him yet) - but I may share it later. 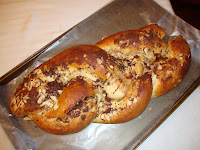 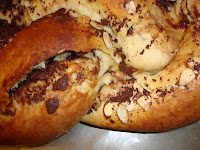 A recipe I will share is mine for apple pie. Rob loves apple pie even more than meat loaf. I should have taken a picture of the size of the piece that Rob typically enjoys, but it would be downright embarrassing! I have been making apple pies for a long time, and since I've started cooking the apples for the filling, I have success every time. I think apple pies require a lot of work, and to have crunchy apples as a result is quite disappointing. Originally I had cooked the filling in a saucepan on the stove, but I hated how the filling would stick to the pan (and therefore create a difficult pan to clean). I then decided to utilize my microwave. No sticking, woo-hoo!

I have tried a few different kinds of apple pies over the years: dutch, french, and lattice crust. A dutch apple pie is a double-crust version, with heavy cream poured into the top of the pie in the last fifteen minutes of baking. The lattice crust is self-explanatory, and the french apple pie is the one I most typically make, which includes a crumb topping. We love to eat our pie warm, with lots of vanilla ice cream. I also like to eat my pie warm [for breakfast] with lots of milk on top! 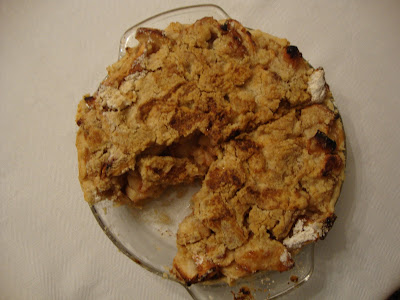 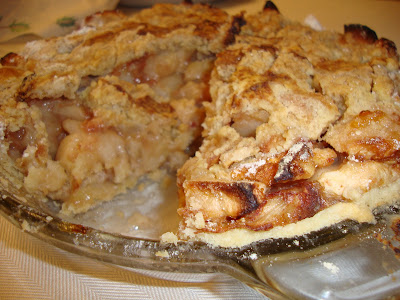 1. Combine apples, sugar, flour, cinnamon and nutmeg in a large bowl. Microwave for about 7 minutes, stopping twice to stir.
2. Fill pie crust with apples.
3. Mix remaining ingredients with fork or pastry cutter or until coarse crumbs are formed.
4. Bake pie for 45-50 minutes at 375 degrees or until crust is golden and top is nicely browned.
Posted by Kirsten's Cooking at 8:03 AM